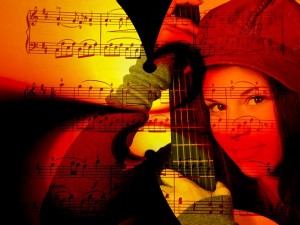 If you have ever been interested in knowing how to compose songs with key changes in them, you are going to love this. Most songs stay in one musical key only, and have melodies and chord progressions that are derived from the scale of that key. Key changes, also referred to as music modulation, create mood shifts which can often be quite dramatic, can sometimes be sneaky and subtle, but will almost always add an air of sophistication to your song.

In any major key, there will be 11 possible key changes. I will first show you the most common, and then, the most extreme!

Whole-Step Modulations: This is the most common method that has been used over the last 60 years or so to add energy to the last chorus of a song. In the key of C major, the chords built from the scale are C Dm Em F G Am Bdim. When we move a whole-step higher to the key of D major the chords will be D Em F#m G A Bm C#dim (note: the symbol for sharp in music is #, which means higher in pitch).

Considering the melody with how to compose songs with key changes: if you only look at the letters above, not the chord quality, you can see that there are a lot of common pitches between the two scales, five to be exact, and two different ones F# and C# in the key of D. This means that any melody will be able to utilize a lot of the same pitches in the new key, and as a result will sound somewhat related. Yet, raising the F to F#, and the C to a C# can add energy to the song.

The most important factor of how to compose songs with key changes is: How many different pitches are in the new key? This determines how closely related the key change will be, and how subtle or dramatic of an effect it will have on your song.

Considering the chords with how to compose songs with key changes: if we create a chord progression using the I, vi, IV, and V chords in the key of C (C Am F G) , This modulates to (D Bm G A) in the key of D. (Note that Roman numerals are the standard method of labeling chords, with lower case ones indicating minor chords.)

A great recent example of how to compose songs with these types of key changes is the song “Black Parade” by the band My Chemical Romance. The last double chorus changes keys right in the middle from the key of G major up a whole step to the key of A major.

Half-Step Modulations: If we create a closer key change, from the key of C major to Db major for instance, the key will actually, and surprisingly, be moving further away. (note: the symbol for flat in music is b, which means lower in pitch).

One would assume that a half-step key change would be closer than a whole-step key change, but if we compare the scales we see a very different scenario. Again, just comparing letters of the scale and not the chord qualities, the key of C major will have a C D E F G A B C pitches in its scales, whereas the key of D flat will have a Db Eb F Gb Ab Bb C Db. The only common tones in the two scales are C and F, with five notes that are completely different between the two keys.

A great example of how to compose songs with these types of key changes is the song “Man in the Mirror” by Micheal Jackson. After the second chorus, as he says the word “Change,” the entire song moves up a half-step, from the key of G major to the key of A flat major (same as G#). This change sounds very dramatic, almost shocking, yet energizing at the same time, which fits perfectly with the lyrics. The song lyrics are about making a major change in oneself from the inside out, and when that key change comes you can feel that inspiring change happening in the music very strongly. Matching the musical techniques to the meaning of the lyrics is will almost always adds cohesiveness to your song.

Exercise) If you have never thought of how to compose songs with key changes before, the first one I would experiment with would be the whole-step modulation in the last chorus of your song. This is a little cliché because it has been used so much, but this is the easiest one to try first to get your feet wet with changing keys.

But keep in mind that there are 10 more types of key changes than the two mentioned above, and there are a variety of ways to use them in your songs. I will have more in-depth training on how to compose songs with key changes using the 10 other possible keys, the different moods they create, and the various ways to transition from one key to another, coming soon.

For now, if there are any songs that you are familiar with that use key changes, feel free to comment below and I will try to use songs that you mention in the upcoming lessons.

Feel Free to and add any songs with key changes in the comments below.

P.S. If you want just one songwriting course that will change your life, it’s this one: https://songwritingplanet.com/sparks/